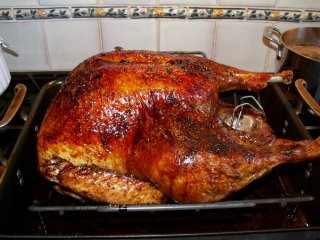 "The art of using up leftovers is not to be considered as the summit of culinary achievement."

(Turkey Tetrazzini was created early in the century for the Italian soprano Luisa Tetrazzini, who made her American debut in 1908 at the Metropolitan Opera House in New York City. Though not the original recipe, this is delicious and a fine way to forward leftovers.)

Preheat oven to 350 degrees. While waiting for pasta water to boil, heat butter in skillet. In 2 Tbsp. butter saute mushrooms, scallions and red pepper. Set aside. In separate skillet, heat remaining butter. Add flour and stir roux with whisk, gradually adding broth, whisking until smooth and thickened. Stir in cream until incorporated and then Madeira or sherry. Add Parmesan and pepper.
Cook pasta until al dente and drain. In a large bowl toss pasta, sauce, mushroom mixture and turkey. Taste seasonings. Transfer into buttered baking dish and scatter top with Swiss cheese combined with bread crumbs and toasted almonds.
Bake Tetrazzini uncovered until bubbling and top is a touch brown for 30 - 40 minutes. Rest a tad before serving with a crisp salad.
(8 servings)

Assemble: Top each of 4 toast slices with a slathering of mayonnaise, greens and avocado. Plop on second slice of toast. Top with turkey, tomato, bacon and cranberry sauce. Season with salt and pepper to taste. Top with remaining toast slathered with remaining mayonnaise and more greens. Diagonally quarter and enjoy.

* Who said a turkey sandwich had to be boring!