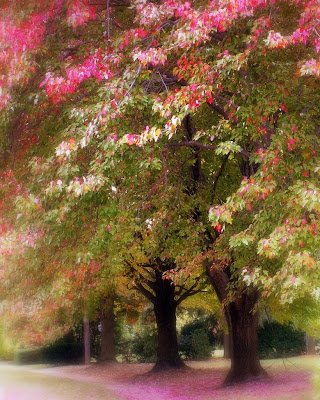 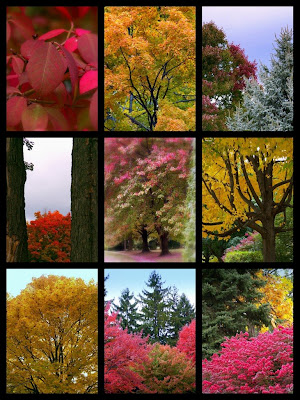 Just look at all those flames! Great shots! And mushroom soup? Yum!

My personal taste buds would fill up on asiago toast and maybe get to the soup later, LOL! Carbs are my friends. The fall photo collage is lovely--nice shots and such vibrant, saturated colors! Fall has always been my favorite season, and has remained such, even as I've become a crazy obsessed gardener.
~ Monica

Yum...I love mushroom soup. This sounds like a delicious recipe Joey. Your photos of the trees in fall color are gorgeous.

Grab a spoon, Garden Girl! Thanks.

Thanks Nancy ~ autumn is striking!

The asiago toast IS tasty, Monica. I think we all are craving a few more carbs now that the weather has snapped (near freezing this AM, as you know, and stalling before venturing out into the shady part of my garden)!

Thanks P.G. ~ my neighborhood is indeed lovely.

This is my favorite time of year... well... until spring comes! Aren't the days just like a dream with all those fabulous color.

The colours on these photos are wonderful. A glorious montage.
K

Hi Joey...You've been nominated for an award! Stop by my blog to pick it up!

Dearest Bren ... indeed these days are rich and beautiful. Thank you for each delightful visit (your #1 fan ;)

Thanks Karen ... though far apart, we live life on a similar planes ;)

sweet joey, what a delight for the eyes and this soup and toast sounds wonderful. i would like to have a seat at your table anyday with all your yummy recipes.
i like the effect of the first photo>.

Thank you, Sweet Spooky ~ I'm indeed honored. I've added the award and when hit will link back to you, dear friend, and your beautiful Wishnik Woods.

Thank you, dearest Marmee ~ do come for there is always plenty to share (like loaves & fishes) with soup either simmering on the back burner or in the frig ... can't live without it! Off to the cottage tomorrow for another cooking bonanza with family ;)