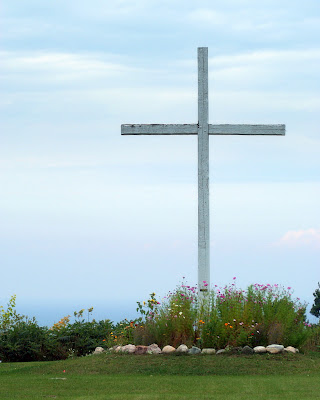 ~ Cross in the village
____________
"Cross Village is named in at least three languages. It was called L'Arbre Croche by the early white traders for a tall, crooked fir tree on the bluff a few miles north of Middle Village (this tree long since cut down). Waganaskisi was the Odawa name meaning 'crooked tree' and Anamiewatigong, 'tree of prayer, or cross, is still the Indian name for the village. "
~ Laura Chaney (owned the Cross Village General Store 1978-1988)
(Cross Village: A Selection of Tastes, Art, and Memories) 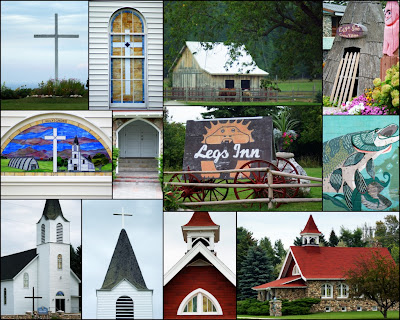 ~ A Look About Town

"Cross Village had a rich and varied history, which is known to date back to the 1600's. Members of both the Ottawa (now know as Odawa) and the Ojibwa Indian tribes resided in this area, at least part of the year ~ primarily in the spring, summer and fall. Locally available materials, include birch bark, porcupine quills and black ash were used in the baskets which they then used as a means of trade.

Jesuits priest visited the Village in the late 1600s and established a mission. It is believed that the original cross on the bluff may have been erected by Father Marquette.

In the mid-1800s, the population of the area began to diversify as more people of European descent moved into the area. It was during this period, that the village was relocated off the shore.

The major early industries were fishing and timber. Other industries and business developed in the area to support these primary industries and the people they employed. Such supporting industries included a mill to process the timber and a cooper to produce the barrels for the storage and transporting of the fish.

In 1855, Father Wiekamp came to Cross Village and built his convent. The convent grew rapidly, and was self-supporting with its agricultural enterprises; it ultimately owned over 2000 acres of land in various townships.

The town continues to grow and thrive until the mill closed in 1911 due to the lack of timber resources. Other businesses suffered as well from the mill closing and some merchants moved out.

It was the fire in 1918 that completely devastated the town, destroying five large stores, the hotel, the post office, the Presbyterian Church and about 25 houses. Over 300 people were left homeless. Although many merchants had originally planned to rebuild, very few did. The many vacant lots in the heart of Cross Village are still a reminder of the fire." 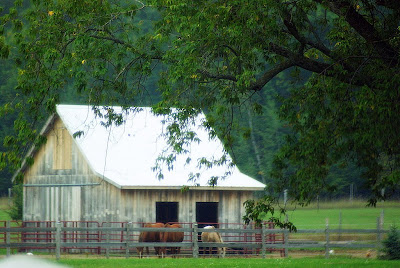 ~ Countryside
____________
Note: The following recipes are from the delightful hand of Glenna Samuels Kimball from Cross Village: A Selection of Tastes, Art, and Memories ~ a book filled with food, lore, and memories of Cross Village residents, many related to the early settlers. As well as old photographs of her Native American ancestors, Glenna's photo is also featured. Although I have prepared many recipes since I purchased the book in 2001, I admit that I have not yet tried these two but wished to share, thinking they tasted of the rich history permeating the area.
CORN SOUP
(Dam na boo)
(Cross Village: A Selection of Tastes, Art, and Memories)
~ Preparation of the Corn in the Fall
~ Now you are ready to make the soup
___
2 cups corn
1 large onion or 2 medium
Meat: beef shanks or venison shanks
2 cans kidney beans
water enough to cover
1 large potato
Put meat, corn and onions in a large pot. Cook 2 1/2 - 3 hours. The last 1/2 - 3/4 of an hour, add the potato. Add the beans the last 20 minutes. Enjoy!
~ Glenna Samuels Kimball
_______________
FRY BREAD
(Zaazigikwadenhs)
3 cups flour
3 tsp. and a little more baking powder
1/2 tsp. salt
1/2 - 1 tsp. sugar
1 1/2 cups milk
~ Glenna Samuels Kimball

Thanks for the interesting history of Cross Village. Sounds like a quaint place to visit. Corn Soup & Fry bread sound like a tasty combination.

Joey, I have really been enjoying your posts on ross Village. What a beautiful place. the buildings and the gardens. I would imagine you could spend hours there and not see everything. I love these plaves that are one of a kind. So much more to them than the chain places. My grandma used to make a fry bread-I hadn't thought of it in years. Will have to try this one and see if I can remember the taste.

It's a lovely stop, dear P.G. Had fun adapting goodies from the cookbook that I purchased several years ago, a taste of the area and Native American history (also part of my life).

Thanks dear Beckie. We so enjoyed our trip. It's fun to share and I'm sure you'll find that the fried bread dough (though not carb friendly) is still yummy!

this little village looks like a quaint place to visit. i love old churches especially to photograph.
very nice.

Such a peaceful-looking village. With its rich history, I am glad it has been preserved. The corn soup sounds interesting--though too labor-intensive for me--I wonder if it is adapted from an old pioneer or Native American recipe?

It was fun to discover this new place by reading your post. The recipe is also fun to read - I get the sense that it's an "heirloom" recipe. I've never made fry bread but it doesn't sound too hard.

Know you would enjoy this area, Marmee. The M-119 Heritage Route following the shoreline of Lake Michigan is breathtaking in all seasons but especially autumn, just beginning when there 2 weeks ago.

Welcome jgh and thanks for visiting. Indeed these are heirloom recipes. Fried bread dough is easy to make though a bit messy and laden with carbs but worth the calories (try small portions if have strong will-power ;)

I would like to watch Glenna prepare this meal. I think it would be poetry. It's so much like the mountain folk we have in NC who are much loved for keeping the culture alive.

I love to read books about who was here before we came along. This sounds like that sort of story. When it is written through those who live it, the message gets through to the soul. I love it.

I would love to be beside Glenna also, dear Anna, especially roasting the corn. This recipe, in her words, is much like those soulful words from my mother, and hers, and hers ... and why I love to cook.

I've been enjoying your blog, having been born and raised in Cross Village. In October my book, Growing Up in Cross Village - Memories of a Barfoot Girl was was released and can be found in several stores including the Cross Village General Store. Coming soon: Looking Back at Cross Village and Beyond. Thanks for the blog:)

Lucky you, Kathy. Thank you and good luck with book! I'll look for it next time passing through.

Thanks, Joey,
If you care to have it here on your blog, my website is www.kathyspublishing.com

I've known Glenna all my life.

What an honor Kathy! Do you have a shared recipe in the Cross Village cookbook?

No, I didn't put one in that cookbook, as I was rather out of touch at the time. I did put a couple in the cookbook our Ladies Guild at Holy Cross in Cross Village put out some years earlier. My brother was Pete Keller who's work is featured in the Cross Village cookbook. I just noticed I put my website address in wrong. It is www.kathyspublications.come

Joey, did you know that Glenna was a direct descendant of Chief Petoskey, who the city of Petoskey is named for? I also typed my website address wrong. It is www.kathyspublications.com. Loving the weather.

I did not know that Kathy. Glenna must be a joy to know. Raining here now but heading north later on ... yes, the weekend weather looks grand!

Yes, Joey, Glenna is a very nice friend. She and my older sister were best friends. My new book, Looking Back at Cross Village and Beyond is now out! Like the others it is available at Cross Village General Store, Between the Covers in Harbor Springs, and Nyes Book Store in Pellston. I am continually adding photos and other things to my facebook and having fun with it.

Good luck with the book, Kathy. Are you on FB ... I would enjoy seeing the photos!

Joey, yes I am on FB, but I meant to and I do have photos there, but what I meant to say was adding photos and more to my website listed a few posts back.

Hi Kathy ... your website is lovely, great old photos, and your poetry grand!

BTW, Kathy ... I have added your site to my Reading & Writing Haunts on sidebar. Good luck!

joey,
Thanks for your fine comments and for adding my site to the sidebar.
Happy 4th of July!