"Every man regards his own life
as the New Year's Eve of time."
~ Jean Paul Richter 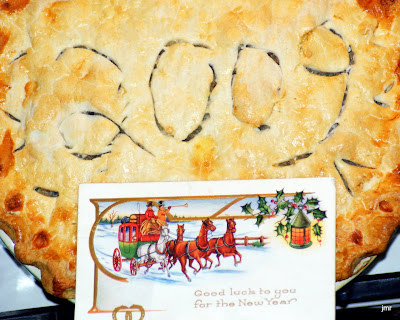 ~ Tourtiere
________
A tourtière is a meat pie originating from Quebec, usually made with ground pork and/or veal, or beef. It is a traditional part of the Christmas and/or Christmas Eve réveillon and New Year's Eve meal in Quebec, but is also enjoyed and sold in grocery stores all year long. This kind of pie is known as pâté à la viande (literally, meat pie) in the Saguenay-Lac-Saint-Jean region.
Tourtière is not exclusive to the Canadian province of Québec. Tourtière is a traditional French-Canadian dish served by generations of French-Canadian families throughout Canada and the bordering areas of the United States. In the U.S. Maine, Massachusetts, Rhode Island, Vermont, New Hampshire, Minnesota, and New York. citizens of Québécois ancestry have introduced the recipe. Every family has their own "original" recipe, passed down through the generations. Like the recipe, there is no one correct filling, as the pie meat depends on what is available in regions. In coastal areas, fish such as salmon is commonly used, whereas pork, beef and game are used inland.
The name supposedly comes from a pie-making utensil but by 1611 tourtière more or less referred to the meat pie as we know it today. There is speculation that this culinary form is related to Moroccan pastry-making practices brought to Europe by way of Spain.
(Wikipedia)
________________________

1 cup vegetable shortening like Crisco (lard for the purest)

Place flour, salt, and shortening in food processor or large bowl. Process with machine or pastry blender until mixture resembles course corn meal. In large glass measuring cup, beat the egg. Add vinegar and enough ice water to equal 1/2 cup. Pour over flour mixture. Blend only until dough holds together in a ball. Shape dough into thick, flat rounds. Cover with plastic wrap and refrigerate until easy to handle (about 1 hour).

Note: Skip the ABOVE and head for the refrigerated section at the market. Purchase Pillsbury Pie Crusts ... unroll (dust with 1 Tbsp. flour), spread into pie pan, flute, fill and bake. Not as good as above but ...

This is really tempting to make. What is in the "summer savory" spice mix?

What side dishes do your serve with it?

This was very interesting, Joey, and how wonderful to have a family recipe handed down for generations! Your pie crust recipe sounds very similar to my Mom's, which is delicious. However, I would head to the refrigerator case in the store for the Pillsbury's:)

I like the quote on yesterday's post--my "garden of the mind's eye" is always beautiful.

This sounds good, but I've been hankering for a good cassoulet.

And a very Happy New Year to you, dear, Katarina. It's been a lovely year knowing you ;)

Delighted to tempt you, Cameron :) Summer savory (Satureja hortensis) is an annual delicate herb, milder than winter savory (Satureja montana) ... often an integral addition to Herbs de Provence. Regular savory can be substituted as each cook has a different hand in the blending of these herbs for the pie (I have a heavy hand).

Hi Rose ... tourtiere is a holiday MUST for Christmas & New Years. My mother also made it for Thanksgiving, a special treat! I've given up the lard for Crisco many years ago but ... nothing beats a flakey lard crust!

A cassoulet does sound good, Jim! For a Happy New Year, hope your hankering comes true. :)

Joey, Do you think there's any relation between your meat pie and the Cornish pasty (meat pies)? My great grandfather was Cornish and lived and worked in Mineral Point, WI for awhile.

oh, savory as in the herb savory! I was thinking it was a special mix of savory spices. Thanks so much!

This sounds wonderful.
Big wishes to you and yours, have a happy new year.
Wishing you lots of blooms in 2009!
:)
Philip

I have yet to make Tourtiere, but I have a few friends whose traditions include making this pie every Christmas.

Needless to say, but say I will, your recipe and picture are giving me the push needed to replicate this dish soon. Thank you.

May the New Year surround you with love and happiness, my sweet friend!

yummy i am printing this off as we speak or as i write. thank you my dear friend, joey. getting to know you this past year has been a hightlight for me. i always appreciate your traditions and angle on life. you seem to live it to the fullest. i hope you will have the most wonderful year in
'09.

Hi Cameron ~ Perhaps you might tuck this away for next holiday season. I have a passion for incorporating herbs & flowers in my recipes, anxious to make your Lavender Scones but will wait until I can harvest my own. Thank you for sharing!

Happy New Year, dear Marysol! I bet you could turn the crust into something grand! There have been many years I think, "Hum. Maybe not this year." (It took almost 1hour to grind 8 lbs. of fresh pork loin this year). But I hear my mother's voice from above shouting, "I didn't hear that!"

Thanks Philip ~ I'm hoping for a 'Bloomin' Good Year' and wishing you one also!

How kind, Marmee. I feel the same about you. It's been lovely stepping into your beautiful life. Wishing you a blessed New Year!

Hi Joey, I searched for ham recipes and this one came up first. Man, it sounds so good. It is chilly here right now with a searing wind and that meat pie with ham and mashed potatoes sounds perfect. I will keep checking back until the ham runs out. It was a Smithfield, very good. I cooked it for six hours in a bag with pineapple juice. Yum! Thanks for having all these wonderful things on your blog for us to enjoy!
Frances

Bless you, Frances, but this recipe is for FRESH ham (UNCURED leg of pork ... like a pork loin roast). You will be most disappointed using your Smithfield. Go for grilled ham panini or delightful Croque Monsieur/Madame with your wonderful cured sliced ham and then use the 'treasured' bone for memorable soups :)

Did you visit:
http://www.smithfieldhams.com/ ...
Fun Paula Dean recipes, sure to make you loosen your belt :), OK since spring gardening chores call around the corner ;)